Hal Meyers Opens for Mainely Country and The Mallett Brothers at the Matrix in Lee, ME

August 29, 2016
So … what a fantastic time at the Matrix in Lee, Maine … this past Friday. Beautiful weather … the weather folk were "WRONG AGAIN" from earlier indications - oh yeah!
A huge thank you to Kevin And Dwayne Bartlett … for putting this show together - it was a pleasure to work with you.

And a loud (but not overly so) thank you to Ocean Sound and Lighting. Great job throughout the evening.

And of course a tremendously large (we're talking really big thank you) to my personal sound engineer Mark Shane - for not only making me sound so much better than I am and for assisting Ocean Sound with the set-up, but also helping to work the audio for The Mainely Country Band.
And speaking of the Mainely Country Band … holy wow, what a terrific group of guys, amazing musicians who shocked me when I was playing the opening set by joining me onstage … I'd say Holy Shit they were incredible, but I don't want to use that sort of language.

Oh, the hell with it: Jeff Simon on lead guitar, Sony Bickford on Pedal Steel, Doug Baker on Bass … and of course my old band mate - Dick Knipping - DDD - on Drum & and all of them on vocals … were kick ass great. Thank you sooooooo much.
And then after they backed me … they played a full hour and a half super set. And - they invited me back to join them on Rocky Top - oh yeah, that was cool - in the Key of "D" - good thing I practiced. If you hear or see the name Mainely Country Band playing anywhere - run to the show.

And … I have to tell you, if you've never seen the Mallett Brothers - you have to check them out - a super nice bunch of guys who play terrific music and had the crowd dancing to their beats. Really good musicians, nice vocals - tons of original tunes … oh yeah - don't miss them. Catch em' when you can while they're on tour.

Again, a terrific concert at THE MATRIX in Lee Maine - and I was very proud to perform for and MC the show.
Photos from the Mainely Country folk and Dwayne Bartlett of the Matrix
Hal Meyers Kavanjo Live music in Maine Maine Banjo Guy Mainely Country Band Martin D-42 Stelling Banjo The Mallett Brothers The Matrix in Lee Maine

The first was at the Hollywood Casino in Bangor …

The Second at the NEW Restaurant in Eddington, Maine called: Heritage on 9 … a private party for their "Mug Club Members" -

The music was hot … fun, funny, irreverent and all around pleasing to those in attendance and this was followed (except for the Casino) - with some incredible SLEIGHT-O-HAND prestidigitation … I even jumped behind the bar at Heritage on 9 and the patrons were "freaked out" - having a blast and totally fooled - of course they had a few beers - but I believe that did not effect their incredible reactions (LOL) 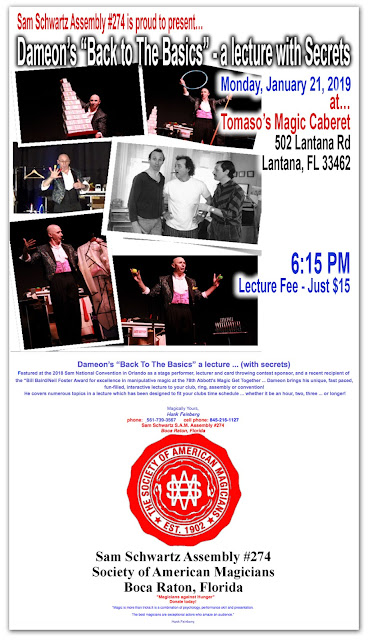 Dameon's "Back To The Basics" Lecture - Society of American Magicians #274

Dameon's Back to the Basics Lecture

TOMASO'S MAGIC CABARET
(Featured in Vanish International Magazine Issue #53)
502 Lantana Rd., Lantana, Fl 33462
All Magicians are welcome -Lecture Fee is just $15.00
(And you get "stuff" to follow along)
Hope to see YOU … and YOU too. And YOU know who I mean. 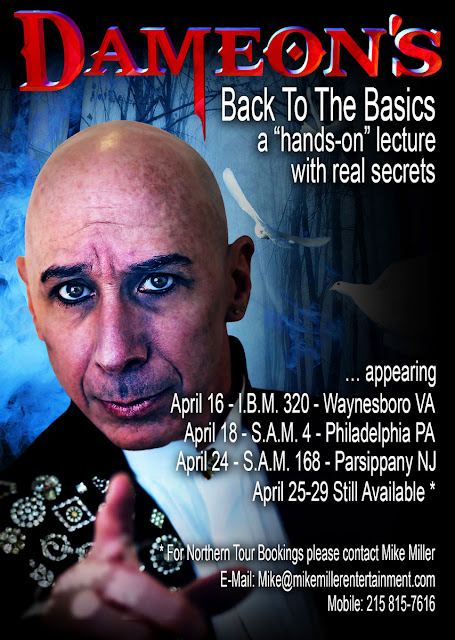 Okay - I was going to wait until it appeared in Vanish International Magazine in a few days - but I figured I'd throw this out to my friends …  I'm on a VA/PA/NJ … Dameon - Back To The Basics -lecture tour kick-off April 16th, 18th and 24th respectively.  I will be in the NJ/PA/CT/NY area until around the 29th of April therefore … if we can add one, two or more lectures (between the 18th - 29th) that would be amazing …

Yeah, yeah, I know it's late … so then lets have a workshop. For booking - please contact: Mike Miller: 215-815-7616 mike@mikemillerentertainment.com  And stay tuned - THE SOUTHERN LECTURE TOUR - Under the Guidance of Scott Wells - kicks off at the end of May.
For further information and bookings, please contact Scott Wells at: lectures@scottwells.com / 713-524-0417 or Mobile: 281-772-6014